Photographing in the Rain 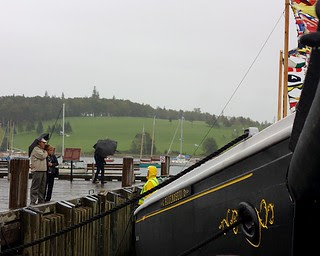 This past weekend saw me playing host to a visitor from Paris, France. Thomas Paris found me through Google+ and I offered to give him a tour of the south shore by bringing him along to the Sackville Photography Club's field trip to the Mahone Bay Scarecrow Festival.

The field trip was canceled due to rain and I almost decided to pack it in and cancel my day with Thomas as well since the weather forecast didn't look good with 30 plus millimeters of rain on its way.  I thought though that Thomas had traveled all the way from France and I didn't want him to miss out on a bit of a tour of Nova Scotia because of the weather so we persevered.

On the way down I decided to change our starting location and head down to Lunenburg since Saturday was also the day the Bluenose II was being re-launched after extensive maintenance. I didn't know what time it was happening but I figured it would be a good chance to see it anyway.  Had we not gone I would not have had the chance to catch this couple standing in the rain enjoying the view of the Bluenose II and I think it was worth the trip for this shot alone.  I really like how the woman has her arm around her husband and how they are talking with the fellow on the ship.

Our day started at 10:00am and I dropped Thomas off at 5:00pm. We had an interesting day traveling the lighthouse route back from Lunenburg and endured "sideways rain" for some parts of it. Our stop in Peggy's Cove was cold and windy but the rain had stopped. All in all we had a much better day than if we had just stayed at home. None of my photographs from the day were stunning shots but they could have been.  at the very least there's no way I would have captured anything had I simply stayed at home.  Don't let the weather keep you from getting out and photographing. Sometimes the best moments are captured in the worst weather.
Posted by Unknown at 2:01 PM

I can't agree more. I also love that you treated Thomas to some proper East-Coast weather. If it's not raining sideways, you're not having fun!